Mounts must be at least one size over the size of their rider.
Note that bipedal creatures can never be considered a mount, unless they are strapped with appropriate specialized gear.

The game does not track the exact space where the rider is on their mount, as both the movement of the mount and its rider are fluid during any given round. As such, during their own turn, a rider can be in any space of their choice within the spaces occupied by their mount. Outside of their turn, a rider is always considered to be part of their mount, so if a mount is affected, the rider is affected too. If a visible effect targets them, a rider can use a reaction to move to any space their mount occupies, representing the mount rearing up or any other fanciful mounted maneuver appropriate to the situation. This maneuver may result in ending beyond the range of an attack, providing full or partial cover, and can only succeed with a moderately difficult animal handling check.

Failing the animal handling check requires an immediate dexterity check to remain mounted. If the mounted creature is trained to be a mount, the failed check results in losing control of the mount until the rider can use an action to re-establish control.

Any mounts:
- Starting a trot (move) – very easy check (Bonus Action)
- Gallop (for any extra directed movement beyond a move) – Easy check (bonus Action)
if check succeeds with very easy, the mount still can move at a trot
- Casting a S or M spell – Easy check when the spell is cast
- Casting a S and M spell – Moderately difficult check
Failure indicates the spell is not cast but the action is spent. No check required with War Caster feat
- Mount has taken damage – Highest of DC10 or half-damage received (reaction)
- Jumping on a moving mount within reach – half movement and a DC10 + 1/5’ feet of speed on the last move action or this move action so far (Move action).
- Mounting an unwilling mount – difficult check (Action)
- Staying on the back of a scared, reluctant or bolting mount – Moderately difficult check (Reaction) when the mount uses a move or a dash action to throw off its rider.

Success
If the check is caused by failing the animal handling check, the rider must use their reaction (outside of their turn) or a bonus action (during their turn) to remain in the saddle, else they fall if they do not have the proper action left (see below)

Falling
When a character fails a DEX check on a mount, or if the mount is killed, each rider immediately takes fall damage, for a height equal to 5’ per size of the mount above small (plus any altitude for a flying mount).
This fall damage is increased by +1d6 per 30’ of speed the mount had done on its last move action.

Every dash costs one Stamina point (see Stamina) and cancels or prevents any hide action or stealth roll (Dashing prevents being discreet/silent/hiding).

On the combat grid, the first diagonal movement counts as 5’, but the second diagonal counts as 10’, the 3rd will be 5’, the fourth will be 10’, and so on.
Note that move can’t be taken diagonally around the corner of an impassable square.

(HOM) In the same way that a character can drop prone at any time at no cost, a character next to a cliff they are adjacent to can jump off the cliff at any time, like if dropping prone..

(RAW) A character is guaranteed to long or high jump a certain distance given their strength score and modifier.
Note that even while jumping you still have a 5’ reach

Long Jump.
A character can always jump a horizontal distance equal to their strength score with a running start, or half that distance from standing.

High Jump.
A character can always jump a vertical distance equal 3 + Str Mod with a running start, or half that distance from standing.
You can extend your arms half your height above yourself during the jump. Thus, you can reach above you a distance equal to the height of the jump plus 1 ½ times your height.

Note that the distance of high jump is taken from the move speed of the creature, but falling down from the height fallow all the rules of falling (i.e. does not count as movement)

(HOM) Further & Higher.
You can jump additional distance by making a Strength (Athletics) check. See the Jumping Additional Distance table to see how much additional distance you can jump. Halve the distance (high or long) if you start from standing. If your Strength modifier is negative or zero, treat it as a 1 for calculating long jump bonus distance.

Note that any Athletics check cost 1 stamina, and that the jump distance is part of the movement. As such, a character could attempt a jump multiple time during a move action or a dash action while they have movement left.

A character can never jump farther than their total move distance (move+dash).
If a character jump for more than their regular move distance, they have to make an acrobatic check using the falling rule, as if falling from the distance jumped.

If the jump distance is halved for any reason (no running start for example), the total movement used is still the maximum length of the jump determined by the athletics check. (Halves are always rounded up when calculating distances).

For any movement for a coupled team (wagon, cart,…), the following rules are used:
– The first round of movement from standstill, the team can only use one move action, and will only move with a successful very easy check (according to the type of vehicle).
- After the first round, a dash and a move can be done each round with an easy check to get to that speed (complication indicates lack of control, failure simply indicates no acceleration that round).
- For every change of direction (N to NW or S to SE for example), an extra 5’ of movement is required for every part of the team above 1. So a team with 4 horses and a wagon requires an extra 20’ of move for a 5’ change of direction, and a team with only one horse and a cart would require a 5’ extra move.
- Doing two direction change with half distance required (rounded to the closest 5’ down) requires a moderately difficult check.
- Doing two direction changes at once without any distance between them requires a difficult check (tight corner turn).
- Navigating rough/difficult terrain (or water) requires an easy check.

Taking-off
To start flying from he ground, a winged flying creature must always spend 10’ of move to take off.
If they wish to remain at ground level without actually move up 5’, they use the command 5T instead of 5U. This indicates that they are flying, but at ground level, instead of 5’ up.

Winged creatures without the Hovering ability must use all their flying speed movement if they remain airborne at all time between the start and the end of their move or dash action. They can’t remain in the same space and elevation during their move or their dash. 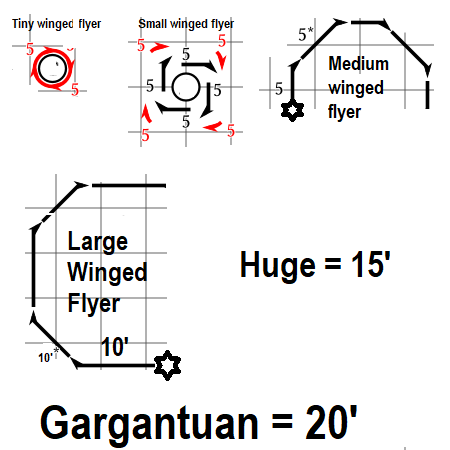 Any creature with wings and a fly speed of 30’ and under always pay difficult terrain costs to go up (so up 5’ costs 10’ of flying speed).

Winged creatures with flying speed of 35’ or more pay the same cost as diagonals when going up, except that the 10’ cost is on the first 5’ instead of the second space.

All winged flying creature can dive once per turn, by folding their wings during a move or a dash action and letting themselves drop straight down to a maximum distance of up to half their flying speed to keep control of their dive.

This dive must be done as part of a regular move or dash during a round, and no gain of altitude has been done this round or can be done later that round.

Diving further than half the flying speed results in losing control, and falling 500’ without control.
(Also see Wings and flight speed below)

Wind can move a flying creature in the direction the wind is blowing unless it succeeds at an Athletics check with a DC equal to the gust speed.
This check is done at the beginning of a flying creature’s turn, and in case of failure, the creature is moved before any other action can be undertaken by a sudden gust of wind.